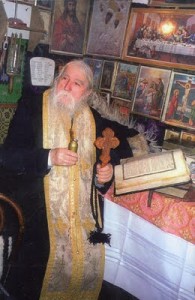 There was a man who loved to steal. And might he at least be poor! But no, he wasn’t! He was a wealthy man and his wife was good, a believer, they, also, had children, they had oxen, sheep, goats, horses, different types of cattle and poultry, land, gardens, vineyards, but he was badly raised by his parents since he could not feel satiety until he has eaten something stolen.  The man had many conversations with his wife. The good woman was telling him:

– Hey my husband, the pitcher goes to the well once too often. If you get caught stealing there will be nowhere to hide from the shame before people.  Everyone will condemn you for stealing because you have everything you need. Why do you steal?

One late July evening there was a full moon on the sky and everything around was as as clearly seen as though it was a day.  Returning from the field back home he suddenly saw a harvested corn-field all covered with wheat sheaves put together into stooks .

And what did he think? “How nice it would be if I take that wheat home with the wagon”, because the wheat was superb. He went home, harnessed the horses, threw a long pole into the wagon to tie the sheaves to it, put some hay and green grass for the horses and in the late hour when even birds were asleep took his little three-four year old daughter with him and set off. The girl enjoyed very much riding with her dad in the wagon:

– Daddy, will you give me a ride in the carriage?

Her mother would not let her go:

– No, I won’t! – the little one was stubbornly saying and started to cry.

– Come on, let her go! The kid likes it when the horses stamp their hooves and wants her daddy to give her a ride in the wagon.

Obviously this was God’s providence and care. And there the peasant arrived in the middle of the field to steal sheaves. The corn-field was close to a huge forest and the road passed by the the forest. He brought the horses close to the place where he was thinking of taking the sheaves out of the field, unharnessed them, took the bridles out of their mouth and gave them some hay.

The girl remained in the wagon. The moon shone and you could see up to the horizon line. Off the peasant went, a thief by temper since childhood, through the field, looking around in all directions – he would turn to the left, to the right, foreward, and back. He was looking around. And why? He was looking whether the field-guard would happen to be somewhere near. And kept calming himself: “Even if he were here, he would probably be asleep in some haystack, it is a deep night already”.

And at that time the little girl was watching from the wagon her father look around in all directions – here and there – and was wondering – naive children! – why her father was looking around like that.

When he was certain there was no one around and no one could see him he snatched several sheaves of wheat and dragged them to the wagon. The little girl through whose mouth the Holy Spirit spoke said to her father:

– Daddy you forgot something!

– What have I forgotten, dear?

– You forgot something! You looked around in all directions but you forgot to look upwards!

– What are you saying?

– Why didn’t you look upwards?

The little girl said that not to reprimand her father. She was thinking that may be it would be good if he was looking in every direction he should, also, look upwards. But this shook the man deeply:

– What, what are saying!

– Daddy, I thought that you should look upwards!

And the fear of God stabbed him so, that he grabbed the sheaves and took them back and placed them in the stooks. He came back, harnessed the horses, put the little girl in the wagon and returned home empty handed.

And his wife know he would never return empty handed. He would filch either some water-melons, or some maize, or wheat or something else but he would always bring some goods back home. And suddenly she sees him return empty and there were still three-four hours left until dawn:

– Husband what has happened to you?

– Woman until I am alive I shall steal no more!

– But what has happened to you? Did anyone see you? Did they catch you? – she thought they saw him. – I told you so? This is how you get rich from stealing!

– Woman no one caught me.

He pointed in the direction of the little girl and said:

– It is because of the little one.

– What has she done to you then?

– Because of her I shall not steal forever! Because the Holy Spirit spoke through her mouth.

– And what did the child say?

– I set off through the field and before starting to drag the sheaves as usual I started looking around – to the left, to the right, here and there. And she was watching me from the wagon and when I returned she said to me: “Daddy you forgot something. You forgot to look upwards.” Then I thought: “What a madman I am! God tells me through the mouth of a child that I should have looked upwards first. Because had I looked upwards first it would not have been necessary to look left, right, forward and back because nothing can be hidden from the eye of the Almighty.”

Addresses of the Donation Boxes: